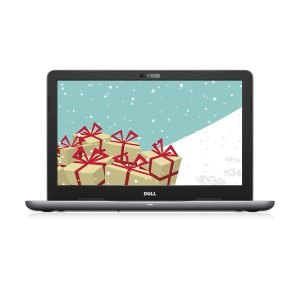 Gray Dell Inspiron i5567-3655GRY is a hot new release 15.6-inch mid-range laptop at an affordable price with a late 2016 model Intel i5 processor and Full HD touch display as part of the Dell 5000 series, for home and office use. Intel i5-7200U (3MB Cache) is a 7th generation capable and ultra low voltage dual core processor at speeds between 2.5 and 3.1GHz with turbo boost and hyperthreading (2 cores and 4 threads) that can deal with both your daily and demanding tasks easily as it is also accompanied by an 8GB DDR4 memory at 2400MHz (fastest we have seen so far) to give you the multitasking power you need, to run different apps while you have many browsers open and 1TB Serial ATA hard drive at 5400rpm rotating speed for size rather than speed as you will not the same performance of an SSD.

Intel i5-7200U CPU has a Passmark benchmark score of 4742 at the moment and is equal to plenty of power and performance, especially for daily tasks. 8GB memory can be upgraded to 16GB which wouldn’t be necessary in most cases but advanced users may want to. Intel i5 offers the typical Thermal Design Power of 15 watts which will help with the battery life of the 42 WHr 4-cell lithium ion battery, which is around 5-6 hours on average. It includes a DVD Optical Drive that reads and writes to DVDs and CDs as well as 2 x USB 3.0 ports, a USB 2.0 port, 802.11ac wireless, Bluetooth, Ethernet LAN with RJ-45, an HDMI output, Multiformat Media Card Reader, a Combo Microphone / Headphone and includes a 720p HD webcam with built-in microphone. 15.6 inch FHD Truelife LED-backlit touch display has 1920 x 1080 pixel resolution for very clear and crisp picture and vivid color and great contrast. Intel HD 620 is a built-in graphics card with a video card benchmark score of 868 and is not really suitable for gaming but will handle the usual multimedia stuff like video streaming, internet browsing, basic photo editing just fine and will let you play the older titles fluently and some of the newer ones at lower settings. You are not buying this PC for advanced gaming purposes after all. 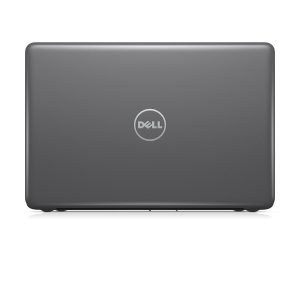 Fog gray Inspiron i5567 is made of solid plastic with a brushed metal-like finish and round edges, weighs 5.1 pounds- average for a Full HD 15.6-inch machine and measures 10.19 x 15.35 x 0.91 inches- light and small enough to be put in your backpack. It comes with the usual bloatware you see on other systems and includes the trial version of Microsoft Office 360 and McAfee antivirus if you want to keep them. The keyboard is backlit with a good size and properly illuminated keys for you to type comfortably in low light or dark and both the keys that include a numeric pad and the touchpad feel responsive (touchpad is a little more sensitive than normal). It works quietly and doesn’t really heat up even when you have it on your lap for a while and the fans don’t start working straight away to keep it cooler. One thing that may make this laptop feel slow is the lack of SSD, during the startups (but Windows 10 starts faster than normal) and when opening files, but we think you will have no problems with speed and performance overall. You have the option to get the model with an i7 processor if you need even more speed and power but again in a lot of cases this may not be necessary. It is offered with a year of warranty by Dell as well as good customer support.