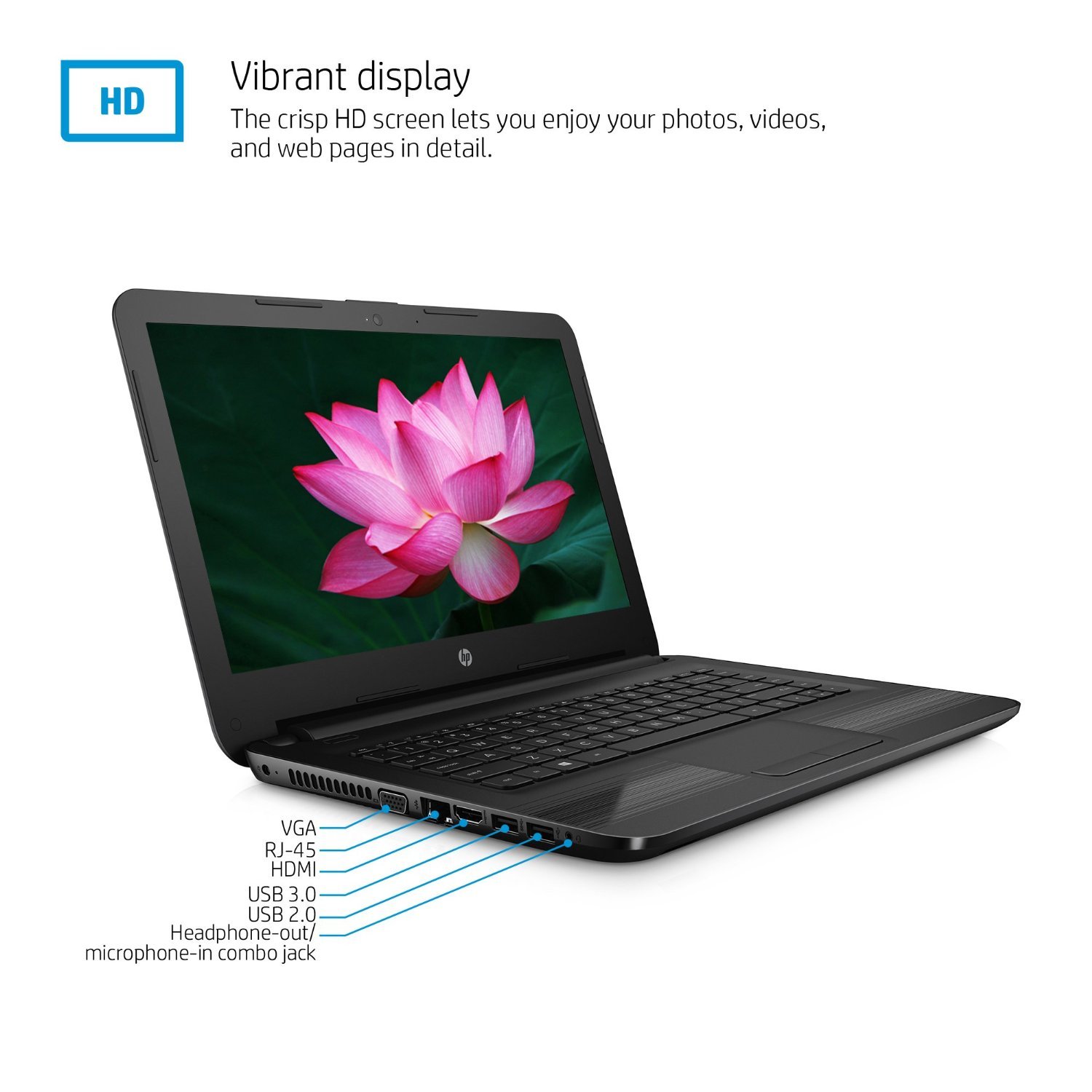 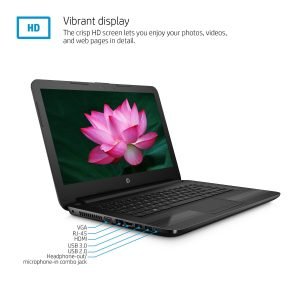 HP 14-an080nr (W2M52UA#ABA) is a 2016 release 14 inch budget laptop with entry level specs for reasonable performance in day-to-day operations like web surfing, word processing and video playback. It comes with the quad core AMD E2-7110 processor (2MB cache) at 1.8GHz speed without turbo or hyper-threading, 4GB LPDDR3 SDRAM memory for the ability to handle a fair amount of multitasking of apps and programs (but you’re probably aware that you won’t be running advanced and demanding multimedia software or games on this machine), 500GB SATA hard drive at 5400rpm spindle speed for those that need extra amount of storage for their media and common files but at standard speed and Windows 10 64-bit Home pre-installed that also helps with quicker boot-ups and is a much preferred operating system than the previous Windows 8 and 8.1. AMD E2-7110 has the Passmark benchmark score of 2036 currently, which we think is not too bad for an entry level machine and is better than recent release Intel Celeron’s and the previous Atom’s and will run your basic daily office and personal tasks smoothly.

14 inch diagonal high definition WLED-backlit non-touch screen has the regular 1366 x 768 pixel resolution- although not Full HD, image quality appears to be generally fine- crisp and clear and the screen is not too small and not too big. The integrated Radeon R2 is a weak graphics chip that performs less than even the Intel HD 3000 and you can play Minecraft and World of Warcraft at lower settings and the simple internet-based games. Rotating speed on the hard drive is the standard 5400rpm but you can’t really expect to have an SSD or a better performing hard drive on such a low priced machine. It works relatively quietly and stays cool even after a few hours. Black with textured linear gradient grooves HP 14-an080nr weighs 3.85 pounds and measures 9.51 x 13.6 x 0.94 inches- is lightweight and slim enough as something you can carry around in your backpack. Internet browsing and typing up Word documents are the two most common uses for laptops and we think that you’ll like having this HP as long as you don’t have high performance expectations. You will run the Microsoft Office- mainly Word and Excel very comfortably and smoothly on this laptop but please note that Office is not included. 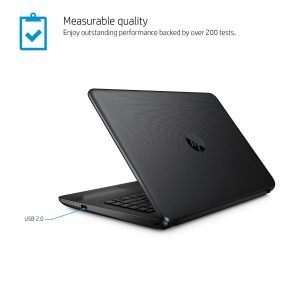 There is no Optical Drive and most customers will probably never use it as most of the stuff they need is found online these days but includes the 802.11bgn wireless, 100Mbps Ethernet with RJ-45 controller, a USB 3.0 port, 2 x USB 2.0 ports, an HDMI output and a VGA output. It will work for a budget traveler as well- it looks like a good combination of size and adequate performance as smaller convertible 2-in-1 machines tend to cost more with about half the performance- Celeron or Atom CPU, 2GB memory and 32GB eMMC storage but much longer battery life up to 8-10 hours on a single charge as the lithium ion battery on this one will last up to 4 hours before needing to be recharged. Please note that keyboard is not backlit and you can’t really expect it to be and there is no numeric keypad on the side but nicely spaced out keys that are nice enough to type with. There is a good quality HP Truevision webcam at the top for casual Skype chats with family and friends and DTS Studio Sound offers an immersive surround sound for your songs and videos. This is overall good value for money, has its drawbacks but we really can’t say much about them considering how hard it would be to find a computer this cheap and with better performance and features. Many people don’t have or want to spend too much money on computers but they still need or like having one, so the sales of these low cost budget machines are consistently good and we recommend this one as a good budget solution.